This bread was my first sourdough bread and will be one of my favorites for quite some time, I think. It has a pleasant tangy/light sour taste and a smell which makes you extremely hungry, even if you ate (too much) five minutes before.  The 125% hydratation white wheat flour sourdough starter used contributed to the many holes in this bread. Lovely. 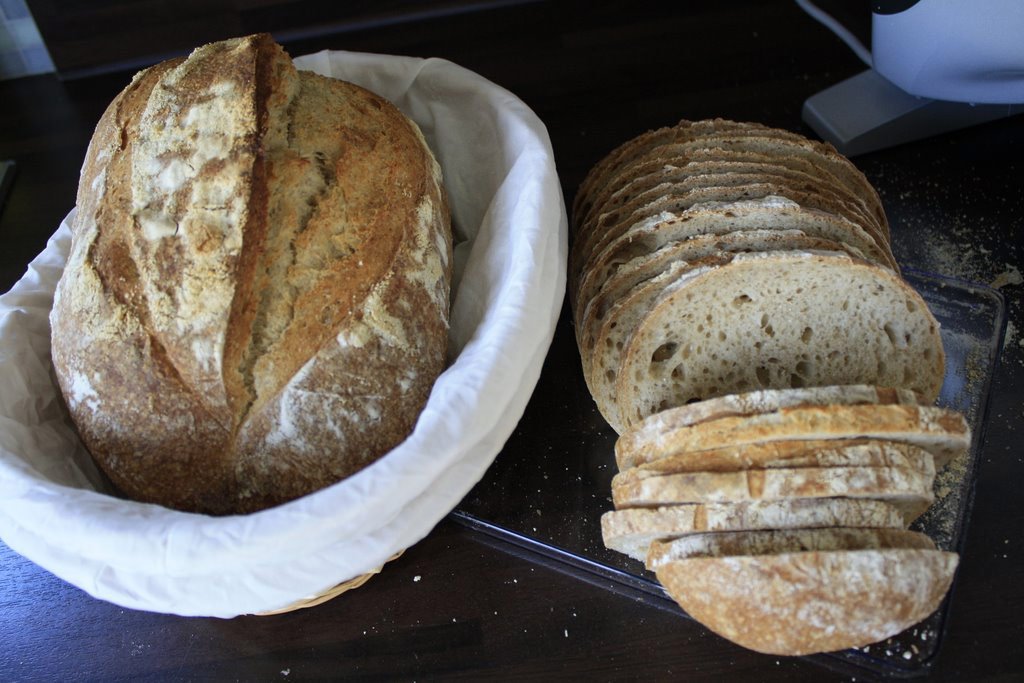 This bread requires the usage of 15% preferment, and 15% of the total flour will be wholerye flour. These are the ratios:

final dough
This will make 2 large loaves. I’ve let the perferment rest for about 12 hours at room temperature and applied a bulk ferment time of 3 hours with a final proof of 12 hours in the fridge (at +/- 6°C)

The recipe originates from Mr. Hamelman’s book “BREAD” and is originally baked in Vermont, USA. That’s why it’s called “Vermont Sourdough”. But it’s actually a bit silly since I live in Limburg, Belgium and the bacteria in your mother starter are unique to your location, so I should be calling it “Limburg style Sourdough”. There’s a small percentage of rye flour added but the rest is plain white bread flour (not the high protein version).

I also baked it using a special flour mix which contains malted barley and walnuts. You can use a pestle to grind some extra nuts (and keep the skin on to get a darker bread). For this bread I also used more wholewheat flour which results in a denser less open structure. I still think it’s quite airy though.

My modified black bread with walnuts and increased wholewheat flour.

For Dutch people: the flour I’ve used is called “woudmeel” According to a google search, it contains the following things:

It’s the roasted malt and soy flakes that give the bread the dark color. Don’t be confused, this is not a wholewheat bread! I’ve added extra wholewheat flour.
I got the flour from Horta Kuringen (Martens)