I needed a recipe to try my round cane banneton on and this month’s Mellow Bakers challenge introduced a nice sourdough recipe: 40% rye sourdough with caraway seeds. According to Mr. Hamelman, the bread “contains just enough rye to be a serious rye sourdoubh bread”. 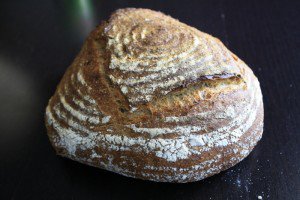 The caraway seeds are something new for me, the recipe calls for 2 tablespoons but as they smelled quite strong, I used teaspoons instead. The end result is a stellar looking and tasting bread with a still very strong caraway flavor. It reminds me of anise seeds. It’s a bit too much for my liking, I might bake it again next time but without the seeds.

You might notice in the pictures below that the bread is still quite grey, for “only” 40% wholerye. I liked it, but too bad the sour taste does not get through thanks to the caraway.

I did not add yeast in the final dough. I don’t know why almost all rye sourdough breads call for additional commercial yeast, I find it quite unneeded as the bulk fermentation time could be simply slightly increased (as I did). The crumb is not very dense at all and contains evenly placed little holes. I folded the dough once (or twice? Can’t remember). 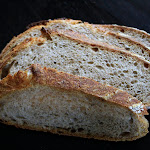 Some slices of the bread