Most baguettes nowadays are made with a “straight dough” which indicates the dough has risen for about 4 hours in total, without an additional preferment (sourdough or not). There’s a clear difference in taste (and as you will see, also in structure) between both methods, and I wanted to bake both side by side to be able to compare them well. 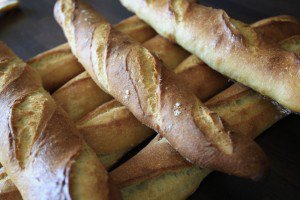 Both recipes came from Jeffrey Hamelman’s “BREAD” book. There are slight differences in fermentation times and hydratation percentages but they are subtle. The straight version contains 70% water and the poolish version only 68%. But as the latter is done with a preferment of 30%, it has more structure and gluten development on it’s own, which translates in less kneading time.

Therefore, Mr. Hamelman suggests to only fold the poolish version once after an hour. Fermentation time has been decreased with the poolish version by one hour because the yeast is already much more active than the “straight dough” version (which is called “French Bread”). The straight version got 2 folds over a period of one hour (2,5 – 3 hour fermenting). 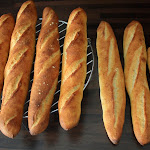 Just out of the oven: poolish version on the left
What’s odd though, is that the poolish version has a more open structure than the straight version, even with the (very slightly) decreased hydratation level! I think it’s largely due to the cuts on the baguettes. It might not be visible on the pictures, but some cuts bloomed nicely during the oven spring and some did not – the volume of the baguettes is largely dependant on correct cuts. I did not bake on a stone, just a non pre-heated sheet pan.
Here are both recipes:
poolish version

I think I’ll skip the “French Bread” recipe next time and concentrate on getting better at the poolish version instead. They tasted much better and I felt a little bit more confident handling them.