My 70% wholerye attempt did not turn out to be very disappointing for the first try – read more about it here. Mr. Hamelman provides a second healthy and earthy rye recipe in his book, but this time with 20% high gluten flour and a soaker of boiling rye flour instead of chopped rye flakes. The previous loaf had to be baked in a tin, this one could be (barely) shaped into a loose boule.

What you should look for 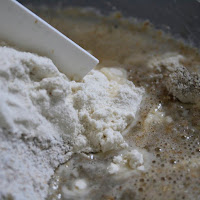 Making this bread was not really difficult, the only challenging part it judging whether it’s ready to be baked or not. I think I underproofed the loaves quite a bit, @ 1 hour. All fermentation temperatures were +/- 30°C.

Prepare the soaker at the same time you’re making the preferment. Mix and cover as quick as possible to avoid the water from escaping as steam.

Use 35% of your final amount rye in the preferment:

If you want, you can let the preferment sit there for up to 24 hours. I’ve noticed the rye sour can take a lot more than a wheat based levain. I’ve let mine ferment for about 12 hours at room temperature.

Bulk ferment: 1 hour, final proofing: 2 hours. (Mine was 1 hour short, turned out to be too flat). You will not notice a big oven spring. It should rise a bit though! 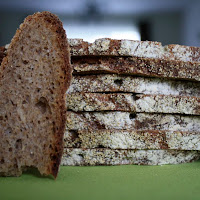 Starting to get hungry now…